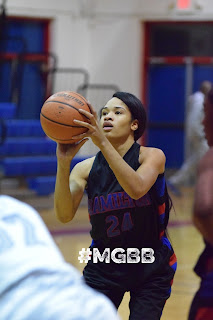 Tesia Thompson has been a well-known local commodity for a while now. But the Hamilton High senior took her game around the country over the summer, and her Wildcats are the better for it.

Thompson spent the summer playing for Team Penny, travelling the circuit and going against some of the best talent the nation has to offer.

"The competition was amazing," she said. "It was the first time I had played on that level ... and I think it was the best decision I could have made. It helped me increase my game and it showed me what my weaknesses were."

So far this season, there haven't been to many weak spots..

Thompson — who averaged nearly 19 points per game last season — leads the city in scoring at just over 28 per contest. She had 38 in Thursday's 76-37 victory over Craigmont that improved Hamilton's record to 5-1.

"I think that was the biggest thing, her getting a boost from having a chance to play with Team Penny," said third-year Wildcats coach Kevin Conley. "That struck a fire under her."

Thompson scored 32 in an earlier victory over Craigmont on Dec. 1. But her signature performance so far came against Kirby in the season-opening Martin Luther King tournament when she scored 49, the highest total for any Shelby County player so far this season. Forty-one of those points came in the second half as the Wildcats rallied from a 20-point deficit.

At 5-10, Thompson is abundantly skilled and can score from pretty much anywhere on the court. She's currently receiving recruiting interest from schools such as Rhode Island, UT-Martin, SEMO, Austin Peay and Georgia State.


And while the scoring is nice, what's impressed her coach even more has been her rebounding; Thompson had 19 in the most recent victory over Craigmont.

"She can shoot the 3-ball, score off the dribble," Conley said. "And she has the ability to get the ball and just go with it, which probably adds about an extra 10 points per game. But as a coach my biggest thing in rebounding ... and she's bought into that."

Said Thompson, "With rebounding ... it doesn't matter how big you are. You just put your butt on them so they can't move you out (of the lane). It's not about jumping."

When district play gets into full swing after the New Year, Thompson and her teammates will have a tough road to hoe. Central and White Station are both extremely talented and Whitehaven looks much improved thanks to the arrival of former Overton coach Lynn Smith and Central transfer Jasmine Carson.

But with Thompson playing like she has, Hamilton will be right in the mix as well.

Three players from Hamilton have won the Best of the Preps girls basketball player of the year award. Can you name them?