Check out what Blue Star Media's Mark Lewis had to say about:

Teal Battle – 2017 – 5-11 – Forward – Olive Branch, Mississippi – Athletic with some size and length…Has a versatile game…Can work well down low or from the trail spot in transition…Can spot up and shoot it or put it on the floor and get to the rim…Playing well but just scratching the surface

Jayla Hemingway – 2019 – 5-9 - Guard – Collierville, Tennessee – Solid, athletic build…Attacking mentality…Goes to the rim with authority…Effective with contact in traffic…Crossover gets defenders leaning…Shot fake is deceptive…Perimeter shot come off her forehead with a forward motion…Will need
consistency to keep close outs honest

Jaida Roper – 2016 – 5-6 – Point Guard – Memphis, Tennessee – Lots of individual skills…Strong ball control…Handled it well on the break and in the halfcourt…Needs to set up her teammates more often to create more opportunities for herself 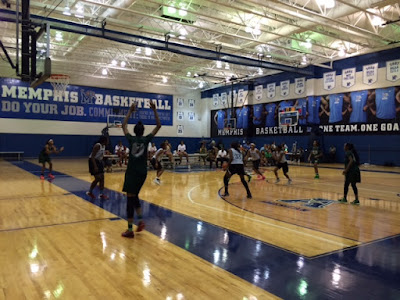 I really enjoyed the environment at the Team Camp. It was great competition. I got to speak to a lot of parents and players. I was introduced to new players. I even learned that one of my former players from the very first AAU team I coached is now coaching. That was 2003.  Boy does time fly.

I felt like a proud auntie watching the MHEA team play... Through the years, several of the players have participated in my trainings sessions, Fall Exposure League and Pre-Season Show Off camp. It is just unbelievable to see how they are getting taller and growing as players. I couldn't do anything but smile as I watched them play. Collierville is another team of players that I've been keeping an eye on for a couple of years because of their participation in my events. Both teams are very young, yet talented.

Whitehaven lost a lot of talent and experience due to graduation. I see senior Brianna Shaw and junior Ariel Williams carrying much of the load this year. However, they will have a good supporting cast. Brianna does a lot of her damage in the paint with her athleticism. Ariel has no fear. She plays with a chip on her shoulder. She will score in any way she pleases whether its getting to the rack or pulling up for the 3. I always have to do a double take when I see sophomore Shyma Ward. She looks just like her mom former Northside standout Marquita Mackey and her game is similar -- aggressive rebounder and scorer in the post.

I always enjoy the conversations I have with Coach Warren, who is back at White Station now as the head coach after one year as the head coach at Cordova. When I saw that his starting five included 3 players at least 5'10ish and up, it reminded me of his Manassas days. He kept a team loaded with long and athletic players.  Teams better be ready to run when they play White Station. Once they get a rebound or steal, they are looking to advance the ball up the court quickly. I was happy to see junior Tamia Jones on the court. The 5'10ish slasher had to sit out last year due to transferring from Lausanne. She is so agile and will be doing double duty as a guard and forward. I am very impressed with Miss Allanna Black's improvement. The 6'0ish forward plays a lot with her back to the basket and her teammates feed her the ball.


Believe me, there will be something different about White Station this year. They are going to play fast. Their rotation is going to be at least 10 deep, AT LEAST. They will be aggressive, tough and scrappy with Damiah, sophomore Brittni Moore and Dejah Montgomery leading.  AND they will be blocking everything that come in the lane.

Looks like Memphis will be representing in Oxford, MS this weekend..

Send me reports to popo@girlsbasketballtrainer.com!!!! 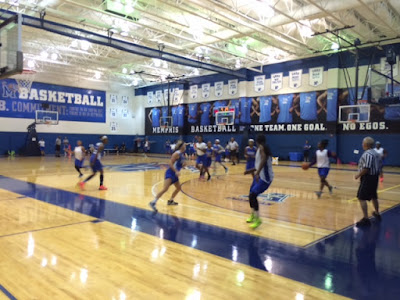 Two things come to mind as I think about this year's Elite Camp.

1) The talent was in the building!
2) Mississippi was representing!

Zaire Hicks looked like the player I saw during last year's Fall Exposure League high motor, explosive and confidently knocking down shots. I was very impressed to see Mahogany Vaught come out of her shell and play aggressively. She has such a laid back personality and plays that way but I liked that beast side of her.. If she keeps bringing that beast out, her game will be sky-rocketing.
Charity Savage was all over the place as expected. On one play, I watched her get a steal, save the ball from going out of bounds, getting her composure to sprint down the court and get the ball back for a layup. Savanna Geeslin was unconscious behind the 3 point line. Oh course, it was Myah Taylor pulling defenders towards her so she could feed Savanna and others for wide open shots.

My visit to the camp was short which means I missed a face or two. But that was enough to have me excited about the upcoming school season and give me some names to add to my #MGBB Mix Highlight list.
Posted by Patosha "Po Po" Jeffery, Girls Basketball Trainer at 11:31 PM No comments:

Registrations will be opening Soon!!!
Posted by Patosha "Po Po" Jeffery, Girls Basketball Trainer at 5:30 AM No comments: 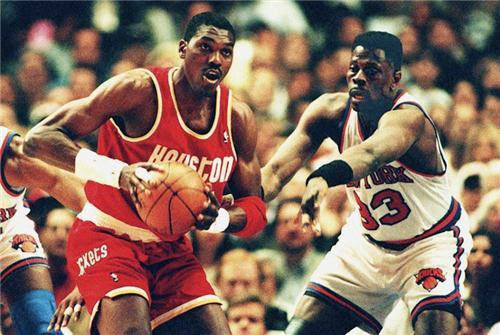 Karl-Anthony Towns (6’11) was the best skilled post player for Kentucky this season. He did his damage on the blocks and in the paint. I never imagined that he could shoot long range.

Read the entire post at PatoshaJeffery.com
Posted by Patosha "Po Po" Jeffery, Girls Basketball Trainer at 5:30 AM No comments:

June is a very important month of the year for basketball players. It can be the first break of the year from basketball for some. Some are getting breaks from their AAU/travel team schedule. While some high schools are using the opportunity for team bonding and activities. June is also a very important month for development. Since we are almost midway through the month, I felt it is a great opportunity to emphasize it’s importance.

Check out the 5 Worst Things You Can Do During the Month of June at PatoshaJeffery.com

Memorial Day Weekend is a mid-point in the summer between the spring evaluation period and the July evaluation period where exposure teams get the opportunity to play one more time before players go back to their high school teams for team camps in June. This weekend, PSG Media covered the Mid-South Memorial Day Tournament that was held in Memphis, TN. There was plenty of talent to be seen.

images and story from Commercial Appeal


When Maia McCoy started track in ninth grade, she never envisioned the heights her Whitehaven career would take her.

McCoy won the girls track award at the 46th Pepsi Best of the Preps, presented by The Commercial Appeal at the Germantown Performing Arts Center on Friday night, becoming the first person — male or female — to win the award for three consecutive years. She also was chosen the girls athlete of the year for public schools.

“It means a lot,” Perkins said. “I wasn’t really expecting to win it.”

Katie Kelsoe of MHEA won in girls swimming for the third consecutive year. She will attend the University of Alabama in the fall.

Alyssa Neuberger of Briarcrest and Peyton McKnatt of Houston won the girls and boys soccer awards.

Claire Sullivan of St. George’s won the girls tennis award after capturing the Division 2-A singles title at Spring Fling.

The third time was the charm for Kenzie Fields of Bartlett. A BOP finalist in volleyball for the third consecutive year, Fields won the award as a senior.

“It’s just another milestone I’ve gotten to accomplish,” she said. “I’m glad I got the opportunity to play, and it’s been a great experience.”

The Sonny Winters Sportsmanship Award was presented to Ronn Rubio for his more than 40 years as a coach at Harding Academy. The Albert C. Dunning Achievement Award was given to Christian Brothers High School soccer player Juan Monserrat.