Patosha Jeffery's 1st Spring Show Off Camp Behind the Scenes

Check out some of the behind the scene footage from the 1st Spring Show Off Camp. There will be another opportunity to show off your skills to college coaches and scouts this fall at the PreSeason Show Off Camp on Saturday, October 3, 2009. Visit girlsbasketballexposure.com for details.

Memphis Central's Aaliyah Whiteside may be slender in build, but her potential and upside are anything but slim. This left-handed guard showed signs of being a future star with an array of one-on-one moves. It appears that she has room to grow physically, both in height and weight, and her game extends from adequate perimeter jumpers to solid on-ball defense. Continued growth, both in game and stature, could elevate Whiteside to national recognition.

Late Wednesday Afternoon Lady Bobcats Director Rod Echols received a phone call from Adidas officials. It was breaking the news to him that one of his players will be representing the United States in August in Japan. Robinson the #28 Player in the Country and the #9 Combo Guard according to ESPN has done quite a job representing Memphis and Adidas in 2008. 2009 will be promising for her as well. When the news was relayed to Robinson, she was excited to know she is one of twelve young ladies to be on the Adidas Candace Parker Aces Global Travel Team.

The Aces will depart Los Angeles August 9th to Tokyo and return to the United States on August 18, 2009. Another Bobcat is listed as an alternate for the Aces. First year participant Shae Nelson who is committed to Ole Miss will serve as an alternate and honorable mentioned. Nelson displayed a great exhibition in Atlanta. The 6'0 Player put on a shooting clinic in games at the Southern Premier Hoops Spring Classic. Robinson is still undecided of her collegiate career but have major offers on the table. Congrats to these young Ladies.
Posted by Patosha "Po Po" Jeffery, Girls Basketball Trainer at 7:47 PM No comments:

Memphis All-Star Game was action packed and exciting. The game was an all exciting extravaganza.

Erica Burgess and Adrienne Pratcher would be all-star icons, but Pratcher would steal the show early with a shooting exhibition dropping the first five 3 pointers. The Texas A & M signee would finish the game with 37 points for the North Team. Burgess of the South Team would gather some ooohs and aaahs from the crowd. Lawanda Clayborn would lead the South with 25 points with her fast pace style and high jumping ability. She would walk away this year as the 2008-2009 All-Star MVP. Clayborn just a few weeks ago gave a verbal to Arkansas State and will play with Central's stand out Jasmine Taylor. Taylor also had an outstanding game in the All-Star Classic. Taylor would go ahead and win the All-Star 3 Point Shoot-Out.

The Game would be an exciting event for the fans as the North Team would lead the whole game. The South would go on a 2 minute rally as Monique Ingram of BTW would hit a clutch 3 pointer to tie the game with 44 Seconds remaining in the contest. The South would then put the ball in Burgess hand, a Southeast Louisiana commit and she would seal the game with 2 free throws with 2.5 seconds remaining on the clock. The south would win 76-74. 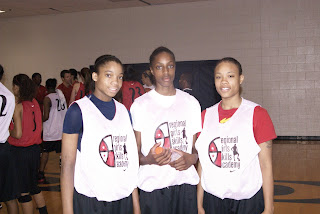 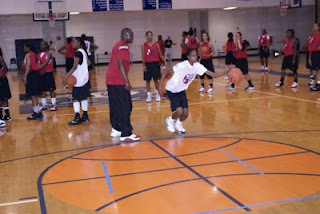 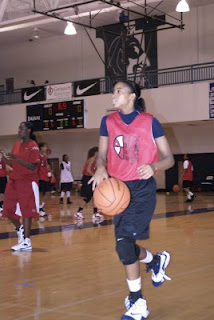 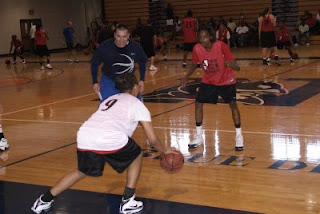 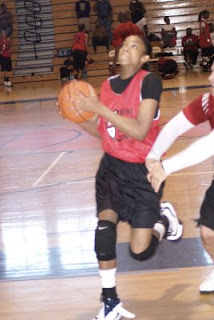 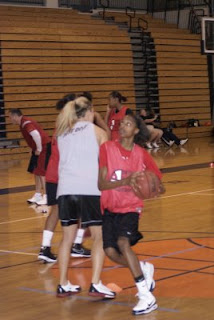 The University of Memphis women's basketball team added a four-year college transfer, a junior college transfer and a high school prepster to a signing class that was already ranked in the top 60 in the nation it was announced by Head Coach Melissa McFerrin.

Commercial Appeal's Pepsi Best of the Preps Girls Basketball teams will be announced Sunday, May 3.

The five finalists for player of the year will also be revealed.
Posted by Patosha "Po Po" Jeffery, Girls Basketball Trainer at 7:16 PM No comments:

Chamique Holdsclaw has returned to the WNBA.

The seven-time All-Star signed a multiyear deal Monday with the Atlanta Dream, who continue to revamp their roster following a 4-30 campaign during their inaugural season. Details of the contract were not released.

Holdsclaw, who retired from the WNBA in 2007, attended some of those games last season. She said Dream general manager/coach Marynell Meadors spoke to her after one about returning to the league. Holdsclaw, who lives in Atlanta, said the fan support made her "hungry" again and the thought of playing at home was appealing.

To get access to the exciting, up to date info, click here.
Posted by Patosha "Po Po" Jeffery, Girls Basketball Trainer at 7:01 PM No comments: 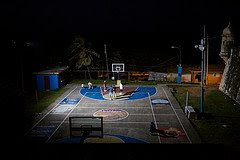 Come train with the ONLY female girls basketball trainer in Memphis.

You'd never know it from watching her, but Brittney Griner—the 2009 Player of the Year on PARADE's 33rd annual All-America High School Girls Basketball Team—is still relatively new to the game. Until ninth grade, the 6-foot-8 center from Houston's Nimitz High was more likely to be seen on the soccer field or volleyball court. Then, she says, "I started playing basketball, and it just felt right."

The numbers don't lie. Griner opened her senior year with 25 blocked shots against Hastings High—a new national high school rec-ord. This season, she hit 70% from the floor, averaging 28 points, 12.5 rebounds, and 8.5 blocks a game. Videos of her spectacular—and frequent—dunks have gotten more than 5 million views on YouTube. She has speed, agility, a love of basketball, and an 86-inch wingspan. Her upside is limitless.


Brittney Griner's highlights from the Texas 5A state semi-final last month in Austin.

"Griner has the potential to be one of the best women ever to play the game," says Glenn Nelson, who follows high school and college girls basketball for ESPN. "Her dunks are exciting, but her size and athleticism will change the women's game like [former NBA great] Bill Russell did in the men's game."

Off the court, Griner is a B student who plays video games, crochets, fixes cars, and has volunteered with other local athletes to give food to the needy. A self-described daddy's girl, she plans to study criminal law and eventually follow her father into law enforcement. "After basketball, I want to be a police officer, like my dad," she says.

For now, however, she'll take her game (and size-17 shoes) to Baylor. And, as head of our 40-girl roster, she offers this advice to other athletes: "Believe in yourself, and never give up when others say you won't be able to do things."

This year's All-Americans—selected by coaches, scouts, and recruiters across the country—come from 19 states. Texas and California lead the pack, with six each. In addition to Griner, repeat selections from last year include First Team honorees Skylar Diggins, Kelsey Bone, and Tierra Ruffin-Pratt.

Skylar Diggins
Notre Dame-bound Diggins is the No. 1 point guard in the nation, averaging 29 points and 6.3 rebounds a game. She has a 3.9 GPA at Washington High in South Bend, Ind.

Kaleena Mosqueda-Lewis
Mosqueda-Lewis is the best sophomore in the nation on one of the best teams in the country: Mater Dei High in Santa Ana, Calif., which finished the season 32-1.

Tayler Hill
With more than 3700 points, Hill is Minnesota's all-time leading scorer for girls and boys. This season, she averaged 32 points a game for South High in Minneapolis.

Markel Walker
Walker averaged 26.8 points while shooting about 50% from the floor for Pittsburgh's Schenley High. "UCLA is getting one of the best they'll ever get," coach Debbie Lewis says.

To get access to the exciting, up to date info, click here.
Posted by Patosha "Po Po" Jeffery, Girls Basketball Trainer at 1:59 PM No comments: 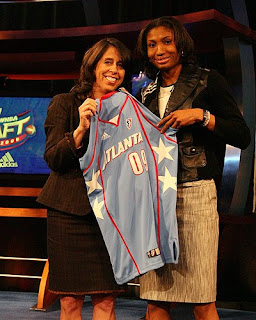 Rutgers women's basketball coach ,C. Vivian Stringer, has led three separate schools to the Final Four in her 38-year career and has an 825-280 mark spanning four decades. She trails only Pat Summitt and Jody Conradt on the career wins list, and guided Rutgers to its fifth straight regional semifinals trip this season.

"My knees are weak, and to think I would be standing here with these great, great, men of basketball," Stringer said. "It's not ever about me. It's about the players who all make it happen."

Stringer got her start in 1973 at Cheyney State, where Hall of Famer John Chaney was the men's coach, and took the school to the Final Four in 1982. She also took Iowa to the Final Four, the only women's coach to take three teams there.

"I am very happy and elated that she was selected to the Hall of Fame this year," Chaney said. "I would think not many, if any, Division II school has its former men's and women's coaches in the Hall of Fame."
Posted by Patosha "Po Po" Jeffery, Girls Basketball Trainer at 5:28 PM No comments: 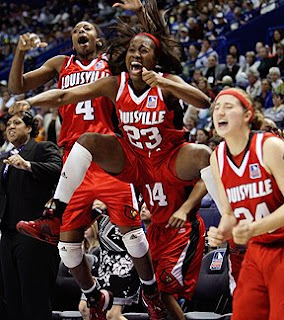 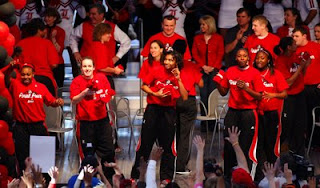 Former Oakhaven High Standout, Mary Jackson and the Louisville Cardinals are heading to the Final Four this weekend..