image and article from DesotoTimes.com 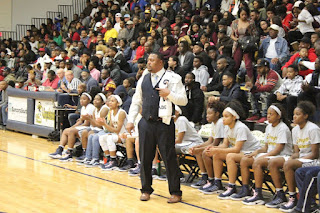 It’s not very often DeSoto County can attract the elite level of high school athletic talent that will gather for two days of girls’ basketball at Olive Branch High School Friday and Saturday in what’s being called the Magic City Showdown.

Starting Friday afternoon and continuing all day Saturday, Thompson has welcomed a lineup of teams that will be highlighted by North Little Rock, Ark., a squad currently ranked as high as eighth in the nation and is now number one in Arkansas Class 7A, the largest class in the state.

The 8-0 Charging Wildcats, as they are called, will be challenged Friday night at 8:30 p.m. by Thompson’s Lady Quistors, which improved to 11-0 Tuesday night with a 72-61 victory over Byhalia. North Little Rock will also play defending MHSAA 6A state champion Murrah of Jackson Saturday at 5 p.m.

The classic will begin at 4 p.m. Friday with Memphis Home Education Association, or MHEA, against Power Center Academy of Memphis.

The challenges of North Little Rock and White Station will give Thompson’s Lady Quistors a gauge of where they are at as they approach the start of divisional play after the Christmas break.

“It’s good on multiple stages because it gives them a chance to assess where they are and to see what they do well and see what kind of team we have,” Thompson said. “We’re going to play quality opponents, so this will give us an opportunity to find out if we have some things right or if we have some things to work on. We’ll pretty much know at the end of the game what we’re made of.”

Thompson, who won multiple state championships at H.W. Byers before coming to Olive Branch with the departure of Blake Jones at the end of last season, said his basketball contacts helped fashion the lineup of games fans will be able to enjoy watching this weekend.

“It’s good relationships and networking with people who know that I try to do the best I can to give everybody an opportunity,” Thompson said. “I’m just glad they are coming and glad it’s going to bring that culture and environment to this school.”