image and story from CommercialAppeal.com 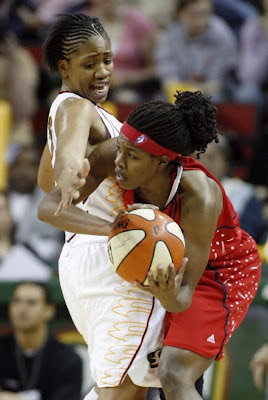 Instead, the former Melrose and Southwest Tennessee Community College star, now 26, has spent that time making a name for herself overseas. Shields was in the midst of averaging just under 19 points playing for Maccabi Ashdod in Israel when she got a call from Los Angeles Sparks general manager Penny Toler, offering her a training camp contract.

"It was kind of shocking to me and it was kind of unexpected," Shields said from Israel. "I was just glad to get another opportunity. It's been awhile. I haven't been in the league in a few years."

Shields was the first junior college player to be drafted into the WNBA in 2007 when the Houston Comets selected her eighth overall. She averaged 5.3 points as a rookie, playing 11.3 minutes per game.

Shields spent 2008 as a reserve on the Shock's WNBA championship team, her last season in the league.

"I can't really say (why)," she said. "It's kind of political. I played well. I practiced well. The political side just came about. Things happen."

In addition to playing in Israel, Shields has spent time in Slovenia and Poland. In the 2011-12 EuroCup, she averaged 21.3 points, seven rebounds and three steals.

Toler, who remembered Shields from her first two years in the WNBA, said she came close to offering her a contract last year before deciding to go in a different direction. This year, however, it was fate.

Toler had just signed veteran Alana Beard, but was looking for another guard who was a scorer, not just a shooter, and could defend. She asked Beard, who was also playing in Israel, about Shields.

"It shows you what type of person Alana is because you know players can hate on other players sometimes," Toler said. "Alana said, 'Penny, she's good. She should be playing in the league.'"

From there, among her list of things to do was to find out who Shields' agent was. Before she could, Toler got an email from Zeev Goldansky, Shields' agent, asking if she was looking for any players. That led to the call to Shields.

Toler believes the time overseas has allowed Shields to mature both on and off the court.

"Now when I'm looking at tape, the good thing about Israel is I get an opportunity to watch tape of her against players that are already in the league," Toler said. "She's not only holding her own, she's outplaying them. She's getting hers, and they're not getting off on her.

Shields, the No. 2 all-time scorer in Memphis/Shelby County history with 3,571 points, said the biggest thing about returning to the WNBA is the chance to play in front of family and friends. At the same time, she's come to enjoy her time overseas.

"I love Israel," she said. "Israel is so Americanized and it reminds me of back home."

With a training camp contract, Toler said there's a high percentage that Shields will make the team.

"I don't just sign warm bodies like a lot of other people do," she said. "If you're coming to our team, there's a spot for you to lose."

The Sparks open their season May 18 at the Seattle Storm. Their home opener is May 20, also against the Storm.
Posted by Patosha "Po Po" Jeffery, Girls Basketball Trainer at 5:10 AM