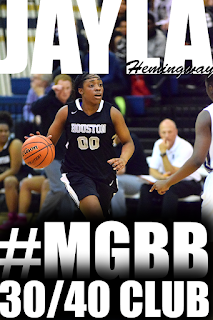 Years ago, Jayla Hemingway decided to trade in the balance beam for the basketball court. And she hasn't looked back.

"When Jayla first started in athletics, my wife had her in cheerleading and in gymnastics," said Jayla's dad, Jeff. "We go to Gloucester, Va. for a gymnastics meet...and she says 'dad, I work hard. I just can't get anything better than fourth or third place. What's the problem?'

"And I said, 'Baby, look around. You're in the third grade and you're taller than the oldest kid in your class. (Gymnastics) might not be the best thing for you. So she started playing basketball, playing at the YMCA.

"She was a gym rat from a young age. And she was just a sponge."

Gymanstics' loss has been Houston's gain. Hemingway led the Mustangs to a trip to the Class AAA state tournament last season and Houston will be one of the favorites to return again this year. Heading into this week, the Mustangs — who played a brutal non-district schedule — were 10-5 and ranked sixth in The Commercial Appeal's Dandy Dozen.

Hemingway is pretty high in the rankings too; ProspectsNation.com has her 13th nationally in the class of 2019. As a result, she's got a list of interested colleges as long as her 5-10 frame.

"Ole Miss, Mississippi State, Kentucky, Arkansas, Clemson, Texas Tech, Vanderbilt, Kansas State," she said to name just a few. "I'm definitely (looking for) a place where I have a good relationship with the coaches and where I can play my game."

The most noticeable part of Hemingway's game right now is scoring. She surpassed 1,000 career points during her sophomore season and is averaging 17.1 so far this year. But she knows there's more to succeeding at the next level than just putting the ball in the bucket.

That's why after a recent Houston practice, Hemingway was in the gym for another hour-and-a-half by herself, honing her skills for the postseason and beyond.

"If you want to be the best you have to train like the best," she said. "I always try to make sure...(someone) may be better than me but they'll never outwork me."

"I think she's growing pretty well into being an all-around player," he said. "Early on in her career, I think she was a really good scorer. But she's become a much better shooter and she's much more reliable on the defensive end.

"The biggest thing for a kid like her, with the talent she has and the motor she has, is how are you making the people around you better? What kind of an example are you setting...she faces a lot of tough situations on the floor just because there's a lot of focus on her."

Hemingway has indeed been in the spotlight for a long time now. After the family moved to the area from Virginia Beach, she enrolled at Schilling Farms Middle School where she quickly began to make her mark.

"It took a lot of getting used to but eventually I was able to adapt to it," said Hemingway of being in the spotlight. "At first it was kind of weird, but I got used to it."

Added Jeff, "I remember the first day at Schilling Farms and Ohio State walks in to watch her play. But for her, the end is what she kept in mind. 'What do I want to do in the end?'

"So she's watching what they did and how they did it. She thinks that's a part of the process and doesn't know any different."
Posted by Patosha "Po Po" Jeffery, Girls Basketball Trainer at 5:00 AM