image and article from Commercial Appeal 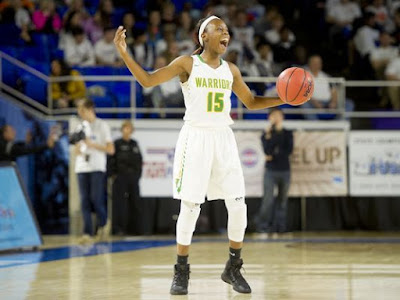 Stewart and all the Lady Warriors were good as gold Wednesday at the Murphy Center.

The 5-8 junior poured in 31 points and was part of a ferocious defensive effort as Central defeated Oak Ridge, 74-63, in the quarterfinals of the AAA girls state tournament. The victory sends the Lady Warriors (29-6) into a 10 a.m. semifinal Friday against Dickson County. The winner of that one will play for the state title Saturday at 1 p.m.

"The key for Johne' is her defensive responsibilities," said Haynes, whose team is in the semis for the second straight season. "The players have a lot of freedom offensively as long as they stick to their defensive assignments. Our mindset is to identify ourselves regardless of who we're playing.

"If we're able to play the way we're capable of and to our strengths, I felt we could be successful."

Central forced the pace from the outset and successfully created turnovers, leading to several easy buckets in transition that helped shake off some of the pre-game jitters.

"Some of them were kind of bug-eyed," said Haynes.

Oak Ridge finished with 21 turnovers, compared to just eight for the Lady Warriors.

"That was definitely part of it," said Wildcats coach Paige Redman. "I'd be a fool to sit here and say that wasn't a big part of it."

Said Haynes of his team's constant pressure on the defensive end, "You can prepare for it but it's nothing like until you see it and actually have to go through it."


Oak Ridge had no answer for Stewart either, who scored 24 points in the first half to help Central build a 41-29 lead at halftime. She finished 10 of 20 from the floor and 11 of 12 from the free-throw line, hitting 5 of 6 in the final minute to keep Oak Ridge at arms length after the Wildcats had closed to within 7 with 1:17 to go.

Others did as well. Kynadi Kuykendoll hit two 3-pointers to fuel Central's decisive second quarter and finished with 10 rebounds as well. And Bionka Massie — the lone senior on the roster — took over for Stewart in the second half, scoring 14 of her 16 points.

"It was as important as having five players on the floor," said Haynes of Massie's contribution off the bench. "It allowed us to maintain (the advantage)."